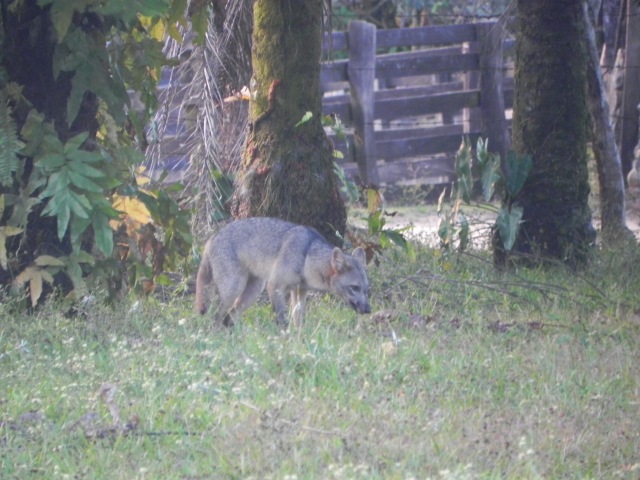 These series of posts continue with some of the medium-sized predators that persist in some parts of the study area. Probably the most common are tayras and short-ear dogs. They can be found crossing pastures, tertiary roads, savannas, and palm oil plantations as well as inside forest fragments.

They eat small birds, mammals, and reptiles. Tayras are more omnivorous as they also eat fruits and insects. We had observed tayras attacking primate groups in the study area, especially of squirrel monkeys and black-capped capuchins, targeting the younger individuals. Groups of up to three tayras had been observed in the area. They are good climbers and sometimes when scared by humans or domestic dogs they climb to escape.

Short-ear dogs have been seen using palm oil plantations as hunting grounds, it seems opportunistically, while dispersing in the study area. They are carnivorous and they have crepuscular habits. Usually observed alone or in pairs in the study area.

Local people also reported both tayras and short-ear dogs attacking chickens and other domestic birds. Therefore, on some farms in the area, they are killed when near to the houses.

The less known are the bush dogs, very similar to domestic dogs in appearance. We had seen them only in the biggest fragments in the area (Carretero-Pinzon 2013), but there are reports in the Llanos of their use of savannas as hunting grounds too. Bush dogs are cryptic animals that live in pairs or small groups. We observed them near to the edge of a big forest fragment using a trail used by humans, early in the morning.

All observation of these medium-sized predators had been opportunistic with some few occasions in which we also had found feces or footprints that seem to be from them.

In recent years we had observed an increase of feral dogs in the area as well as the use of dogs in hunting inside of the biggest forest fragments. Although we still don’t know what the effect of these feral dogs on the populations of medium-sized predators can be. There are reports of disease transmission, especially skin problems, transmitted from feral dogs or dogs used in hunting to bush dogs, from other parts of their distribution area. This can be especially important for the population of this species that we suspect is low and rare in the area. More monitoring on this will be needed in the future.