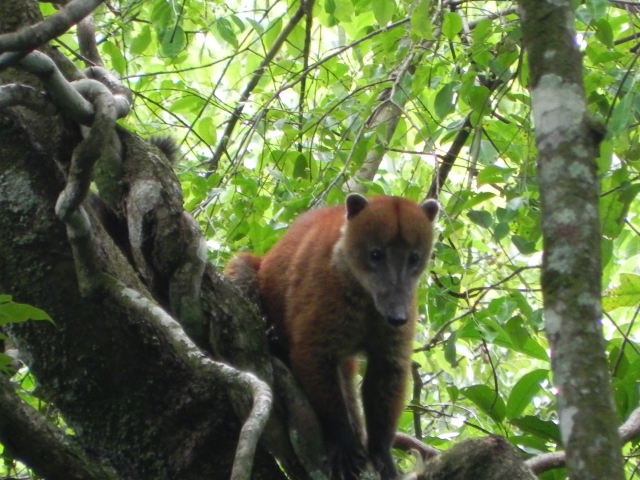 Solitary coati from one of the forest fragments in the study area.

Today we are going to talk about coatis, medium-sized mammals with long snouts that usually are found in the forest in big groups up to 30 individuals (usually females and their infants) or solitary individuals, generally males. The first time I saw a big group of coatis was in a big forest, I was walking looking for monkeys of course, when a feel some noise near to the ground and on the trees. Coatis are great climbers and sometimes they climb to escape from predators. When they notice me, they just stop every movement, it was like if they were playing freezing. A kind of a game we used to play when I was a kid in which someone screams “freeze” and everyone needs to stop their movements in the position they were when they hear the scream, and you can move until someone scream again after a few minutes. It looks the same to me. It was funny some animals were just moving their eyes following my movement, some had a hand in the air as if giving a step forward or trying to catch something in midair. They are omnivorous and goes around the forest looking for fruits and insects. In the study area they are present in some forest but not in all. In the forest fragments where this project started 15 years ago, there were not common to see coatis in the past, however in the past 5 years or so it has been more common not only to find solitary males dispersing but also to some groups of females and their offspring.

An even less common mammal present in the study area is the crab-eating raccoon, I only had seen them once in the study area. They are solitary and nocturnal animals. They eat small crabs, fish, mollusks and some frogs and insects. I only notice his presence because he had to move a bit from his hidden place in a high tree cover with lianas and vines after the group of squirrel monkeys I was following wake him up. A couple of times after this I had found some tracks that seem to belong to them.

Porcupines are more common in the study area, not so easy to see as they are nocturnal, but we sometimes found some thorns in the ground or even some dead animals. It seems domestic dogs attack them very often. When waking in the forest at night sometimes it is easy to hear them scratching bark from dead trees and it is one way to spot them as the noise, they do is loud.

Even more common and less loved are the common opossum as well as other smaller opossums that can be seen in the area. They are marsupials, like koalas and kangaroos, which means that their babies grow up outside of the body in a small pouch located in their belly. They are omnivorous and one of the reasons most people in the study area don’t like them is that sometimes they eat small chickens. They are solitary and nocturnal; they climb trees and their tail is like another limb they can use to hang to reach fruits.

Although all these mammals had been observed in the area, all of them had been observed inside forest fragments and we still don’t’ know how much they use pastures and palm oil plantations. For the crab-eaten raccoon, it’s possible that their persistence in the area is due to their use of forest around streams that are the most common in the study area. Porcupines and opossums, in general, seem to move between forest fragments using living fences as well as pastures. Local people had reported coatis crossing pastures and savannas on a few occasions, and they probably use living fences as well to move through the area.

A common opossum in the study area.