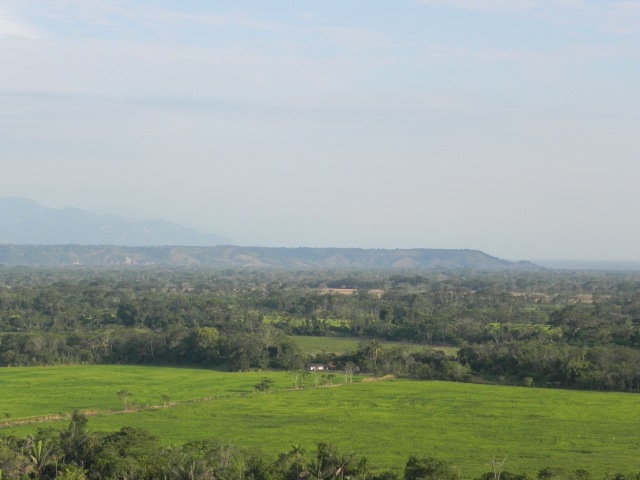 This post is about the second family and how this project had changed their perceptions of monkeys and fauna in general. This story is about a family that I met when I first arrive at the main farm in which this project has been developed. They were the people in charge of the farm (names had changed to protect people in this story).

Pablo was good at handling cattle and horses, very considered with the people working with them, but he loves to take small parrots to sell and hunt from time to time and armadillo or something else, not because they didn’t get access to a protein source just because it’s part of the tradition in this area of Colombia. Marta his wife, was and still is an amazing cooker and a great person, but she also thought that forest animals were only for food and to get some profits. When I arrived, they have two girls, a teenager Diana and a baby girl Rosa, later a boy join the family. Diana started to visit the forest with me and learn about monkeys and other animals, but she never was too much into animals. Rosa grow up with me close to her, as I was living in the farm at that time. During those years I was collecting information about Colombian squirrel monkeys and spent my days following monkeys and my nights playing with Rosa.

In 2005, we started a small project with the landowners to plant fruit trees in the area next to the stream in front of the farmhouse. During that process and through some visits to the forest to see monkeys and birds Pablo start changing his behavior towards all animals. When Rosa was 3 years old, she also started to want to go with me anytime that I went to the forest. She was too small, but she loves animals, especially horses and started to ride at that time with her dad. Sometimes when I went to the forest for just a couple of hours, I take Rosa to the forest with me, I take notes about plants and insects and see monkeys while Rosa was with me.

Rosa went with her dad and me to plant trees and she grows up seeing the monkeys as some of her backyard neighbors who eat fruits and drops things from the trees from time to time when we were looking at them. They live on that farm for four more years in which we learn from each other’s and they became great support from this project. After they move to different farms over the years, Pablo introduces me to other farm owners and whenever was possible I visit those farms and talk about the importance of monkeys for the forest and farmers.

Rosa is now finishing her high school and one of her career options is related to the environment. Pablo is still managing a farm and on that farm, by his suggestion, the farm owner doesn’t allow hunting and try to preserve the forest and animals that inhabit those forest.

Although this project didn’t have a big component on education or has been focused on changing people’s behavior, it’s though the personal relationships that I and some students had built over the years that these families had changed their perceptions and behavior towards nature. Therefore, if you have a project near people sometimes just talking with them about life can lead to a change in people’s behavior towards nature and the effect our actions have on it.