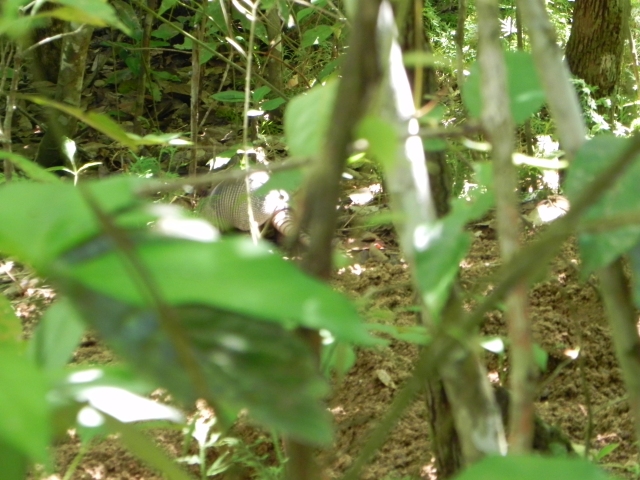 An armadillo searching for food in a forest fragment at the study area.

We continue with the series of posts talking about other mammals present in the study area. We are talking about two groups of very different, but beautiful mammals, sloths, and armadillos.

The species of sloth we had identified in the study area is the southern two-toed sloth (Choloepus didactylus), they are solitary, and we had seen them eating in trumpet trees (Cecropia spp.).

They are nocturnal and difficult to see. As other sloths, they go down to the ground to defecate, but most of their time is spent in the treetops. They mainly eat leaves and can camouflage very well the leaves of the trees in which they rest or feed, making it even more difficult to see them.

Armadillos are in general, small-sized mammals, except by the giant armadillo. In the study area, we had seen nine-banded long nosed armadillos (Dasypus novemcinctus). We also now from other colleagues work that in the region, especially in the biggest forest fragments in the study area it is possible to find the giant armadillo (Priodontes maximus), although it is rarely seen.

All species of armadillos are hunted in the area although is illegal. It has been traditionally hunted by indigenous and peasants in the region over centuries. When hunted, people usually use dogs to find them and if they hide in their burrows, people dig big holes surrounding the hole in which the dogs follow the armadillo.

They are scarce and difficult to see. They are mainly nocturnal, although the nine-banded long nosed armadillo can be seen during the day too.  We had seen them using living fences areas to feed and move between forest fragments. They mainly eat insects. Burrowing holes are common in most of the forest fragments in the area.