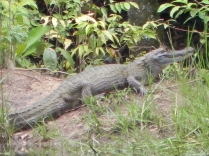 Today I start a series of six posts in which a summary of all the findings of this project is presented. In this first post, some of the findings related to the primate community and biodiversity of the study area, in general, are presented. The following five posts will present the specific findings related to each of the primate species studied in this project for the past 15 years.

The most common primate species in the area are the red howler monkeys and the black-capped capuchins (Carretero-Pinzón et al. 2017). Although, in general, the primate community is composed of the five primate species mentioned above, all the big primate species (woolly monkeys (Lagothrix spp.) and spider monkeys (Ateles spp.)) has been extirpated from the area for more than 100 years according to local people and are found now only towards the Macarena and Tinigua National Parks, southeast of the study area.

For all primate species, the presence of the species in a forest fragment depends on the amount of forest surrounding a specific fragment (Carretero-Pinzón et al. 2017). Small fragments (less than 10 ha) are used mostly as a stop when primates species are dispersing between fragments in the study area. Except for red howler monkeys, who can live in these small fragments permanently.

The presence of living fences as well as isolated trees increases primate species movements between forest fragments. Living fences are used by all primate species not only for dispersion but also as part of their home ranges with the use of the living fences in a seasonal pattern to get access to additional fruit trees, arthropods and to get access to flooded forest fragments (Carretero-Pinzón et al 2010; Carretero-Pinzon & Defler 2018). Living fences are also used by tamandua, armadillos, squirrels, hedgehogs, coatis, snakes and a wide number of birds.

When forced all primate species in the study area can cross large extensions of pastures, with a recorded distance of up to 4 km for red howler monkeys and 3 km for dusky titi monkeys (Personal and local people observations). Giant anteaters are common on pastures and crossing secondary and tertiary roads in the study area in early morning hours or late in the afternoons. Occasional observations of white-lipped peccary herds in the eastern part of the study area had been reported by local people. The last report of a herd near to San Martin town by a local farmer was nearly ten years ago.

Small fragments (< 10 ha) are used as a temporal home of coati groups, who use fragments of different sizes and move through pastures and living fences. Other mammals, such as giant anteaters, deer, armadillos, hedgehog, opossum use these small fragments as a permanent home range. Farms in which we had observed more mammals are the ones with more living fences, isolated trees and small fragments (< 10 ha). All five primate species can live in fragments of gallery forest, lowland forest and swamp forest (forest patches composed mainly of Mauritia flexuosa; Carretero-Pinzon & Defler 2018).

Over the past 15 years, in some of the fragments that were fenced to reduce the cattle use of forest fragments, we have observed the regeneration of the underground vegetation. Also, in those fenced forest fragments we observed the return of coatis, squirrels, and guans, these animals were not observed during the first years of this project. An emergent problem for the biodiversity of the area is the increment of feral and domestic dogs in the area that hunts in groups inside the forest fragments. 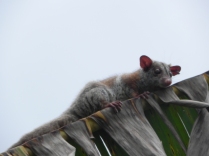 © Copyright Disclaimer. All picture used in this web page are protected with copyrights to Xyomara Carretero-Pinzón. If you want to use any of these pictures, please leave a message in the website. Thank you.