As I mention at the beginning of these series of post, I’m going to share some of the observations and research questions that we are still trying to answer. Here is the first one. 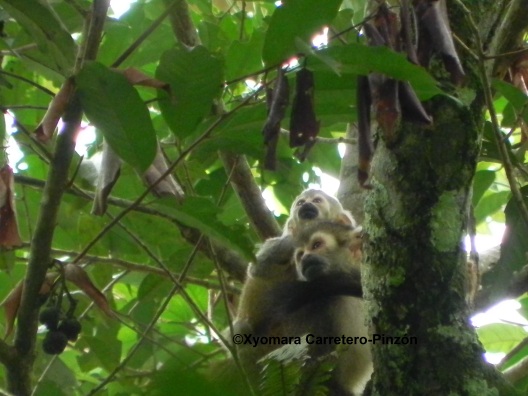 In August 2005, I first saw Chela, an adult female of Colombian squirrel monkey. Her gracile look and marked lines below her eyes, told me that she has more than six years (For a detailed description of how to determine age in wild squirrel monkeys see Mitchell 1990 dissertation).

A juvenile of one year and a baby from that year were moving all the time close to her, and spending all their resting time with her, eating close by and even taking some food from her hands. All these make me think that they were her babies from last and that year.

Squirrel monkeys gave birth to one baby every year. Every year between the end of December to the end of February, Colombian squirrel monkeys have babies. In the last 15 years since I had been observing her group, Chela had at least 13 babies.

Recognizing juveniles features in squirrel monkeys are difficult, even more to differentiate individuals, and they change rapidly from one year to the next. So, only few times I was able to follow Chelas’ babies to the juveniles age. Only in 8 cases I was certain that her babies made it to their first year.

But, how long a female like Chela can give birth? That is a question that is not always easy to answer for wild animals. It usually requires that you follow individual for long periods of time, almost their whole life and in the wild this can be a challenge.

For the last 15 years, Chela had given birth to one baby every year, until the end of January 2017, that year I discover that for the first time since I started to observe Chela, she didn’t have any babies on her back.

This observation leads me to think of three possibilities:

1) that it’s possible that females of squirrel monkeys after certain age will not produce any more babies, a menopausal phase as the one observed in killer whales, humans and other primates.

3) Chelas’ baby was killed during the first weeks.

Although I’m not sure what of these options is the right answer. There is an open window to explore the first option in a wild group of Squirrel monkey that has been observed for the last 15 years with a frequency enough to discern possible patterns, especially from a female of which we can guess that already reach at least 21 years old and still looks very agile and healthy.

In 2018, it was not possible for me to visit the area during the birth season, therefore no data on Chela’s reproduction is available from that year. However, in the birth season of 2019, Chela was found again without a baby and in close proximity of a young female that not only had a baby from this year but also had a baby from last year. At some moments this young female was observed carrying both babies. Probably Chela’s daughter with her first two babies.

© Copyright Disclaimer. All picture used in this web page are protected with copyrights to Xyomara Carretero-Pinzón. If you want to use any of these pictures, please leave a message in the website. Thank you.

One thought on “Monkey Forest Tales: How many babies a squirrel monkey female has in her life? Chela’s story”